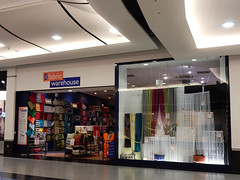 Retail unit on North End Mall in Centrale, vacant as of March 2016.