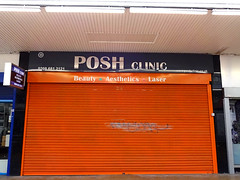 Business premises on St George's Walk, vacant as of June 2017.

As of October 2017, signage for a business called "Posh Clinic" has appeared (pictured).

It was previously a branch of charity shop RFFR (Relief Fund For Romania) photo, but this closed down by November 2016.

By October 2015 the premises were occupied by RFFR (Relief Fund For Romania), a charity shop which was previously a couple of doors down at numbers 37-39. This moved on again some time between December 2015 and mid-2016 (as of May 2016 we hadn't seen it open for a while, and by November 2016 it was definitely gone, as there was another business opening up in the space).