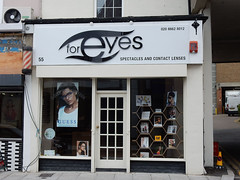 Business premises on Frith Road, vacant as of June 2018.

It was previously an opticians called For Eyes, which opened in August 2015, but this moved to Greenwich some time around October 2017.