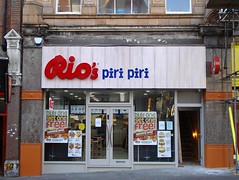 As of December 2013, shopfitting work is in progress (pictured).