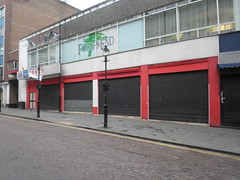 As of November 2012, it's being refitted and there's a sign up saying it will be a branch of Sams 99p pound shop.