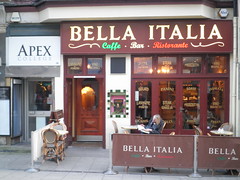 As of October 2016 there's a sign up indicating that it'll be opening soon as a branch of Indian vegetarian restaurant Saravanaa Bhavan.

It was previously a branch of the Italian restaurant chain Bella Italia, but this closed down some time between May and September 2016. As of September 2016 it was vacant and stripped out photo taken through window.