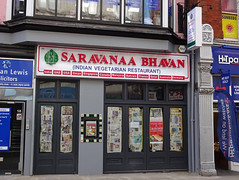 As of October 2016 there was a sign up indicating that it would be opening soon as a branch of Indian vegetarian restaurant Saravanaa Bhavan photo. As of March 2017 this still hasn't happened, but progress has been made in that there's a proper sign up above the shopfront (pictured).