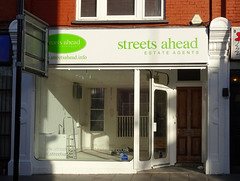 Note: As of December 2015, this branch is closed, but we're not sure if the closure is temporary or permanent.