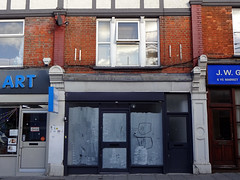 As of February 2019 there was shopfitting work going on photo but no indications of what it was going to be. It was still vacant as of August 2019 and December 2019.