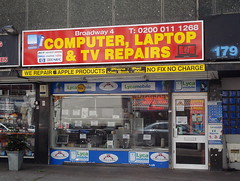 It was previously known as Al-Waqt Electrical Ltd photo, but changed its name some time between December 2013 and April 2014.