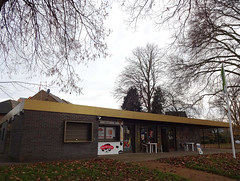 Cafe in Wandle Park. It opened in July 2014, and in mid-2015 was taken over by local social enterprise Mum's The Chef, which also used to have a unit in Centrale.

As of early December 2019 this cafe is still run by Mum's The Chef, but isn't currently doing food since they're in the process of changing the menu. Hot drinks and pre-packaged biscuits are still available though.