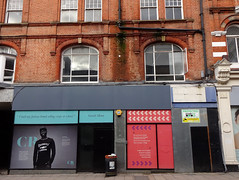 It was previously a homewares shop known as Home Shop photo. This changed its name to Gift Shop photo some time between June 2013 and July 2014, but little else about it changed. As of July 2014, the frontage advertised "electrical goods, tools, rugs, cushions, gift items and much more" as well as "mobile phone unlocking, accessories, mobile repairs, SIM card".