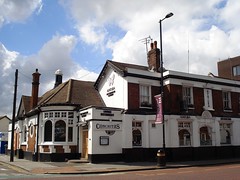 It was listed in the 1895 Good Beer Guide as a pub called the Duke's Head. By August 2008 it was a tapas restaurant called Bodega photo (though this was possibly more of a pub with food, rather than an actual restaurant).

By August 2012 it was a Mediterranean bar and restaurant called Apatura. According to a Croydon Radio interview with the owner in the same month, it was fine to come in just for a drink, though the main focus of the place was as a restaurant. According to the same interview, they welcomed children, and highchairs were available.

Prior to January 2013 it advertised itself as Mediterranean, but it started offering Tex-Mex food too when the Conchitas site across the road closed down due to the landlord asking for a large rent increase; Apatura and Conchitas had already been under the same ownership, so the Conchitas staff and menu moved across to the Apatura site. However, by December 2019 the Tex-Mex food was no more and it was now advertising itself as Turkish.