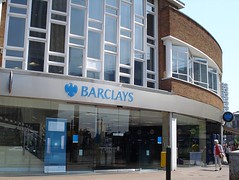 Business premises on the corner of Wellesley Road and George Street

By May 2012, 19 and 20 Norfolk House had been knocked into one and were occupied by a branch of Barclays bank (pictured). This was still in place in December 2019.