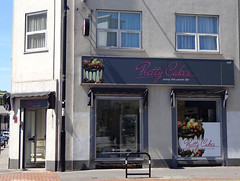 As of July 2012, 256 High Street was vacant and shuttered, with debris piled up inside and signage indicating it was previously occupied by a business known as Gourmet Grill House photo. The premises were still vacant as of August 2014, November 2014, February 2015, and July 2015.

As of November 2015, there was some kind of refit going on inside, and according to a photo on Twitter it was going to be a pizza place called Pizzeria Pellone. This was open by mid-December 2015 photo.

It was renamed to 500 Degrees in September 2016 photo, though remained under the same ownership. This also did takeaway and delivery, with online ordering via Hungry House. It specialised in Neapolitan-style pizza, and had a wood-fired pizza oven.

As of July 2017, 500 Degrees was temporarily closed due to an issue with the extractor fan photo of notice, and as of early October 2017 had still not reopened, but in November 2017 Su-Lin reported that it was open again. It closed down again by late 2018, with a sign in the window offering catering equipment for sale photo.

It was vacant as of January 2019. As of March 2019 it was still vacant, but with a notice in the window photo stating that a business called Pretty Cakes was looking for staff.

Pretty Cakes was open by mid-May 2019. This had a few tables and chairs for sit-in, but did hot drinks and cakes only, no savoury food. It closed down again by December 2019 photo taken through window.