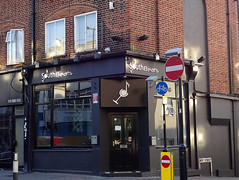 It was previously a cocktail bar called South Beats, which opened in November 2015, but this closed down some time between June and December 2019.