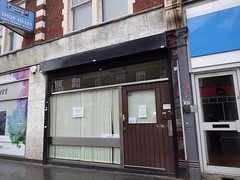 Business premises on the High Street

As of December 2019 the ground floor is vacant and to let photo of notice, though there might still be an organisation called Beats Learning operating on the upper floor(s) photo of notice.

Previously a Polish grocery shop called Polskie & I photo, but this closed some time between October 2013 and March 2014 photo.

It was vacant as of March 2014 with a sign in the window advertising it to let photo. Still vacant as of April 2014.

As of early May 2014 there was shopfitting work going on inside photo. Signage for a shipping and money transfer company called Map Express Cargo was up by late June 2014, but this closed down again some time between October 2017 and June 2018.

A branch of Barnes Harrild & Dyer at 76 London Road moved here from Park House some time between June 2018 and June 2019, but as of June 2019 was in preparation to move again to the Interchange office building near West Croydon Station. It had departed by the end of the year photo of notice. It's not clear whether this was on the ground floor or upstairs.