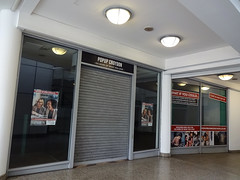 It was vacant as of October 2019 photo, but during the latter half of November 2019 it was used as a popup business school photo of poster.