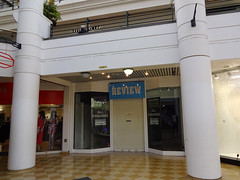 Retail unit on the lower level of the Whitgift Centre, vacant as of late October 2019. Still vacant as of December 2019.

Some time between June 2015 and January 2016 a clothes shop called Kranti opened up photo. However, this had closed again by late February 2016. The unit remained vacant as of mid-May 2016.

A clothes shop called Italian Suits (or possibly Boss Italian Suits) opened up some time between May 2016 and January 2017 photo, but closed again between August and October 2018.

The unit was vacant with the windows papered over as of October 2018. At some point between then and October 2019, something called Review opened and closed again.

By early October 2019 it was occupied by clothing shop Klass photo, which was previously located in Croydon Village Outlet. However, this closed down by the end of the month, before even managing to put up its own sign.