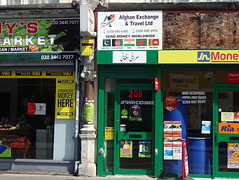 Money transfer and travel agency on London Road. It opened some time between December 2018 and August 2019.

As of January 2012, the premises were a single shopfront which also incorporated the present-day Worf Enterprises next door, occupied by a party shop called Party Crafts photo. Its frontage advertised wedding cakes & birthday cakes, balloon decoration, helium balloons, and catering and cake decoration equipment for hire. This closed down some time between March and November 2017.

As of November 2017, there was shopfitting work going on inside, involving dividing the unit into two photo. By June 2018, a snow cone, milkshake, and party supplies shop called Snow Ballz was open in the left-hand side photo and Worf Enterprises in the right-hand side. The main part of Snow Ballz was actually located behind Worf Enterprises — the left-hand entrance was a corridor which opened out further back.