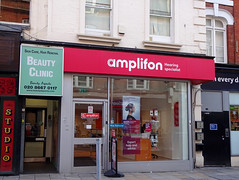 Hearing aid specialists on George Street. They moved here from their previous location at 208 High Street around June/July 2015.

It was vacant photo, stripped out photo taken through window and advertised to let as of November 2013. Still vacant as of August 2014. Still vacant as of May 2015, though with a sign in the window photo stating that a branch of Amplifon would be opening there soon.