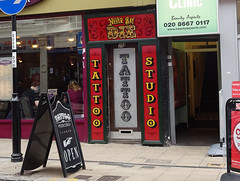 Tattoo studio on George Street, located on the first and second floors of the building. According to a member of staff in December 2019, they used to do piercing too but now it's just tattoos.

It was previously occupied by a dental surgery, which moved to Woolwich House on the other side of George Street around 2009. Regarding the date of the move, a member of staff at the new location in December 2019 told us that the move had happened around 10 years previously. In line with this, Google Street View for July 2009 shows "Dental Practice" on the door and a A-board outside identical to one we saw outside Woolwich House in May 2012 photo.