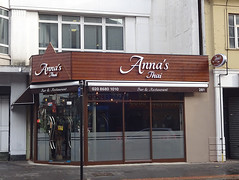 Thai restaurant on the High Street. It was previously down the road at number 235-241 photo, but moved here in late 2016.

They also do takeaway and delivery, with online ordering via Just Eat.

The premises were previously occupied by a Tex-Mex restaurant called El Sombrero photo, but this closed down some time in 2016.
Existence last checked in December 2019.
High Street ...