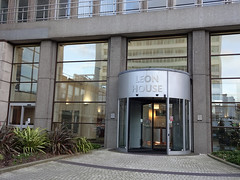 Cafe Leon was a cafe on the ground floor of Leon House on the High Street. Although Leon House was a private office block at the time (it has since been redeveloped into flats), the cafe was open to the public.

The cafe closed down some time between December 2015 and September 2016. According to Leon House reception, the closure was due to the end of the cafe lease, and there were no plans for another operator to reopen it.