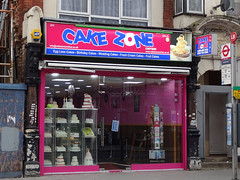 Some time between July and December 2015, Broadgreen Londis became Limra Convenience Store, incorporating a cake shop called Cake Walk photo. However, a business card collected in the same month actually used the name of "Cake Park" instead. Some time between then and early April 2016, the name on the front changed to "Cake Zone" and the name on the canopy changed from "Londis Food" to "Baraka Convenient Store" photo.

By September 2017 the convenience store aspect (and cashpoint) had been removed and there were cafe tables inside instead. As of both September 2017 and July 2018 it only did hot drinks and cakes, no savoury food, but at some point during its existence it offered sandwiches, pasta, and salads under the name of Sandwich Zone photo of flyer.