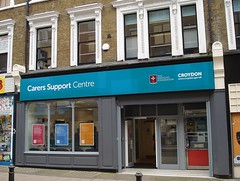 Support centre for carers, located on George Street. It opened in October 2013.

It was previously a branch of Cheltenham & Gloucester — the unit was vacant as of February 2012 photo, but traces of the removed C&G signage were still visible.

In October 2012, a planning application (ref 12/01951/P) was submitted for use of the premises by the Carers Support Network/Carers Information Service. The covering letter for the application stated that the premises had been vacant since June 2009.

As of June 2013, Gareth Davies reported on Twitter that work on the new Carers Support Centre was in progress.