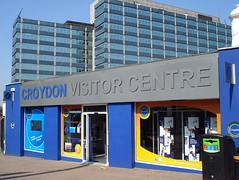 The Croydon Visitor Centre was an information centre next to East Croydon Station. According to the Croydon Advertiser (in a story that has since been deleted from their website), it opened in December 2008.

It closed at the start of May 2015 photo from later that month, and by January 2016 the building had been demolished photo.