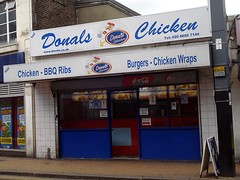 Fried chicken takeaway on Station Road, near West Croydon Station. It's primarily a takeaway, but it does have four seats inside if you want to eat your takeaway there.

According to their frontage as of August 2012, they are halal, and they offer "chicken, BBQ ribs, burgers, and chicken wraps". Much of the internet (including Royal Mail) seems to think it's called "Donalds Chicken", but the frontage says "Donals".

Accessibility: No step to get in, just a sort of ridge. The counter inside is fairly high.