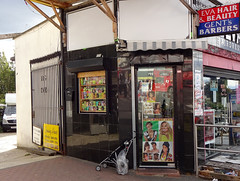 Hairdressers on Derby Road near West Croydon Station. It opened some time around September 2018.

The premises were previously occupied by a gold buyer, payday loan, pawnbrokers, and cheque cashers called Croydon Gold Buyer photo; this opened in late 2011 but closed again some time between March 2013 and mid-2014. (The last time we noted it as being definitely open was in March 2013, and the final tweet on their Twitter account was posted in early July 2013. As of April 2014 we hadn't seen it open for a while, despite walking past quite frequently, and as of July 2014 the shutter had been covered in graffiti and Cash And Carry Beds next door were regularly propping display mattresses up in front of it.)

On the evening of 11 September 2014 there were people inside sorting out displays of what looked like scarves and jewellery. A few days later Jewellery World opened selling scarves, jewellery, bags and makeup photo. There was also a taxi sign above the frontage, but this appeared to just be an advert, rather than a sign that one could book a cab here.

Some time between August 2015 and February 2016, the scarves and things were all replaced by mobile phone accessories, and a new person was in charge, though the name on the sign didn't change photo. During this incarnation, it also sold popcorn.

It remained vacant until a baguette shop called Open Faced Hot Baguette photo opened on 30 September 2016. For the first few weeks of its life this only sold zapiekanki, or "Polish pizzas" — toasted baguette halves with toppings such as mushrooms, Polish sausage, peppers, and cheese. As of early November 2016 it switched to selling boxed meals based on Polish sausage, pork steaks, salad, and potatoes, though it still offered Polish sausage in baguettes, and it also had bigos (hunter's stew). As of January 2017 the zapiekanki were back again alongside the hot food.

There was no internal customer-accessible space (it's a really tiny unit, essentially just a corridor down the side of Eva Hairdressers next door), but they did have a couple of seats at a small table just outside.

Open Faced Hot Baguette closed down again some time between April and August 2018.

A hairdressers opened some time around September 2018. As of October 2018 there was no sign on the frontage, but a poster on the door included the name "King's Daughter", so we guessed this might be its name. However, as of January 2019 this had been replaced by another poster with the name "Didi Express". The owner told us in December 2019 that it doesn't have an actual name, and suggested that we list it under her name (Grace).