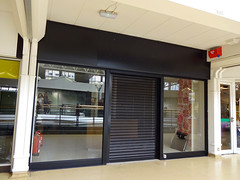 Retail unit on the upper level of the Whitgift Centre, vacant as of August 2018. Still vacant as of March 2019 and October 2019.

It was previously a hairdressers called Hairbox photo, but this closed down some time between April 2017 and August 2018.

It was previously a beauty salon called Amaí photo, but this relocated to Sutton in March 2015.

A hairdressers called Hairbox opened some time between May 2016 and April 2017 photo, but closed again by August 2018.