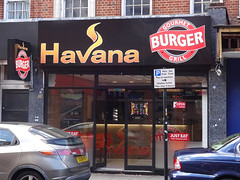 By July 2012 it was a kebab and fried chicken takeaway called Sizzla Grill photo.