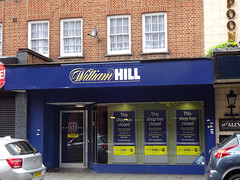 It was previously a branch of the William Hill betting shop chain photo, but this closed down some time between October 2017 and October 2019.

As of July 2012, it was vacant and advertised to let (but under offer), with signage indicating it used to be a restaurant called Desi Hut photo. In September 2012, the William Hill betting shop chain was granted planning permission (ref 12/01998/A) for display of an exterior sign, and in October 2012 they were granted further permission (ref 12/02106/P) for extended opening hours as a betting shop.
South End ...