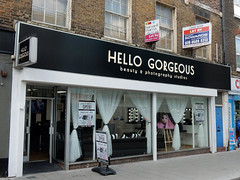 Photography/makeover studio on Church Street. It opened in June or July 2015.

It was previously occupied by a branch of Beaumont Beds photo, but this closed down in March or April 2015. As of April 2015 it was vacant photo and stripped out inside photo, and there was a notice in the window photo stating that the other branches were remaining open and that the company was "currently looking for new premises in the area".

As of June 2015 there was another notice in the window photo stating that a photography/makeover studio called Hello Gorgeous would be opening there soon. It wasn't clear whether this replaced or augmented their existing premises in Centrale, but in any case the Centrale branch had closed by September 2016.