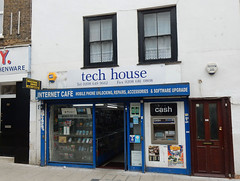 Mobile phone shop on Church Street. It was previously known as One 2 Call photo, but changed its name to Tech House some time between November 2014 and April 2015.

By December 2019 it was also operating as an internet cafe.