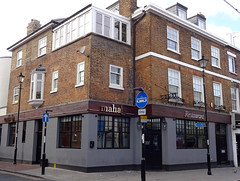 Romanian restaurant on the corner of Church Street and Old Palace Road. It opened in August 2016.

Accessibility: A small step to get in, no more than an inch. Toilets not checked.

The building was previously occupied by a pub called the Gun photo.

The Gun closed some time in the latter half of 2012, and by early December 2012 signs had appeared in the windows photo advertising the forthcoming opening of an American bar and grill called Big Mamma. This was open by mid-December 2012 photo, but closed again after a serious fire in late January 2014 which caused damage to the restaurant photo.

As of August 2016, there were signs in the windows indicating that a Romanian restaurant called Mahala would be opening there soon. This was open by the end of the month photo.