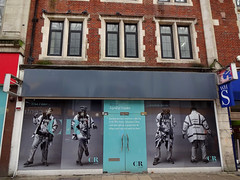 It was previously a clothes shop called Bardo photo, which opened in March or April 2014 but closed down again some time between October 2017 and June 2018.

According to a photo on Flickr, as of 1989 it was Tammy Girl.

According to another, by December 2008 it was a clothes shop called Poison.

Poison remained open until at least February 2013 (see photo as of May 2012, but closed some time between then and August 2013. As of mid-August 2013, the windows were papered over, and this remained the case as of October 2013.

As of November 2013 it had reopened under new management. Although we were told it would keep the same name, the sign came down and by the end of December there was a temporary sign up reading "Passion" photo. However, Passion had closed again by late January 2014.

As of March 2014, shopfitting work was going on in preparation for it to open as a branch of Bardo clothes shops photo.