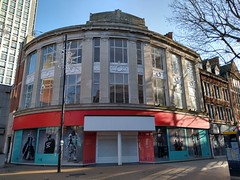 According to London Footprints, the premises were built by Burton in 1926. According to a photo on Flickr, it was certainly occupied by Burton's in 1989.

By May 2012 it was shared between Dorothy Perkins and Burton photo, but these shops closed in August or early September 2014. As of early September the signage had been removed and there was an estate agent sign up offering "flagship store to let" photo.

As of October 2014 there were indications that the shop had been let and would be opening as some kind of homewares store photo 1, photo 2. A furniture and homewares shop known as Home Living photo was open by 23 October 2014, but this was gone again by mid-August 2015 (Home Living possibly moved directly to 94-95 Whitgift Centre, though we can only confirm it was there by January 2016).

As of October 2015 it was swathed in protective wrapping with the name "Paul Hunt Homes Ltd" photo. This was gone by February 2016 photo.