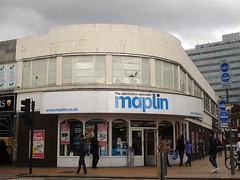 Business premises on the corner of North End and Station Road, near West Croydon Station, vacant as of June 2018. Still vacant as of May 2019 and December 2019.

It was previously a branch of electrical goods chain Maplin, but this closed down some time between March and early June 2018 after the chain went into administration photo of notice.

According to a photo on Flickr, as of c. 1989 this was a branch of the Leeds Permanent Building Society. Indeed, as of June 2018 there are still what look like old mailboxes for this business on the Station Road side of the building photo.

According to Google Street View, by July 2008 it was a branch of electrical goods chain Maplin. Maplin went into administration in February 2018, and by March 2018 there were signs in the windows advertising a closing-down sale photo of sign. It closed for good by early June 2018 photo of notice.