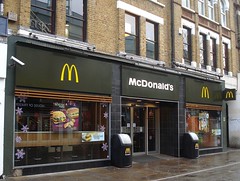 Fast food on North End. It has two entrances, one on North End itself (pictured on this page) and the other on Chapel Walk (an arcade leading into the Whitgift Centre) photo.