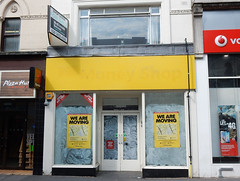 It was previously a branch of the Money Shop photo, but this closed down in early June 2015, with business transferring to the nearby branch at 16 London Road photo of notice.

The property was vacant as of December 2011 photo with signage indicating that it was previously Baron Jon menswear. The Money Shop opened some time in the first half of 2012.
North End ...