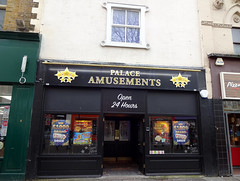 From December 1909, this was the site of the Queen's Hall cinema, though the cinema was closed by 1912; see Cinema Treasures entry for more details.

According to a photo on Flickr, as of c. 1985 the premises were occupied by a shop called SOS.

The Woolwich branch had closed by December 2011, at which point the building was advertised for rent while simultaneously housing a temporary clothes shop photo from December 2011, photo from February 2012. A clothes shop with an actual name — Solo — opened in July or August 2012 photo, but closed again in March 2013 (after a closing-down sale in late February). A different clothes shop photo (with no apparent name) opened in the same month, but had closed again by June 2013.

As of mid-June 2013 it's vacant and there's a notice up photo stating that a bingo premises licence application had been made for this address under the name Palace Amusements.

As of mid-September 2013, gaming machines had been installed inside and it seemed to be progressing towards opening.