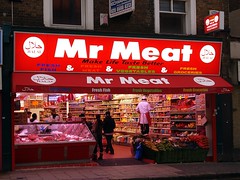 Halal butcher on Church Street. It opened some time around November-December 2012.

Accessibility: A shallow ramp to get in, and step-free inside.

The premises were previously occupied by an amusement arcade called Atlantis Amusements photo. As of July 2012 the premises were up for let and under offer, while as of November 2012 they had been let and work of some kind had started inside.
Existence last checked in December 2019.
Church Street ...