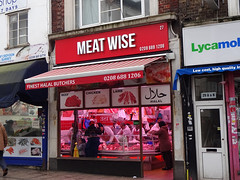 According to a photo on Flickr, as of December 1990 the premises were occupied by a (presumably non-halal) butchers called Kennedy; see also undated photo.