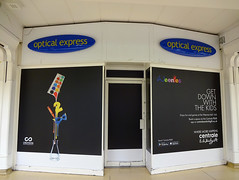 It was previously occupied by a branch of Optical Express photo, but at some point between September 2012 and May 2013 this moved photo of notice to Woolwich House, 43 George Street.