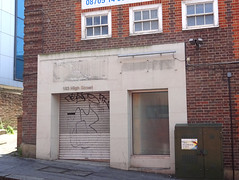 It's located a little way up the slip road that leads off the south side of the flyover next to 103-105 High Street.

It was previously occupied by a laser eye clinic called Optimax and a skin clinic called Destination Skin photo, but these closed down some time between February 2015 and July 2016.

The clinics were on the first floor. They may have been two separate businesses (we're not sure), but they had a single entrance from the street.