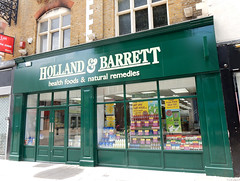 It sells chilled and frozen meat and cheese replacements (including Fry's frozen burgers etc), herbs and spices, gluten-free food, and various snacks. Some of the snacks are unpackaged photo, so you can bring your own reusable container. It also has the usual pills and powders.

Accessibility: No steps to get in, no steps inside.

According to a photo on Flickr, as of c. 1985 the premises were occupied by a pizza restaurant called PizzaLand.

It was then boarded up photo some time in August or September 2014.

As of January 2015 work had started on the frontage photo though there was no indication of what it was likely to be next.

As of May 2015 there was shopfitting work going on inside. By 29 June 2015 the Holland and Barrett frontage was installed, there was stock inside, and a member of staff told us it was due to open the next day.