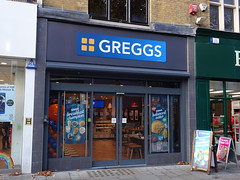 Bakery, sandwich shop, and cafe on North End. It opened in November 2016.

Although it has enough seating to classify it as a cafe, and it's fine to come in just for a cup of tea, all food and drinks are served in disposable packaging and you have to buy your food at the counter and clear your table afterwards yourself.

Accessibility: No steps in, and a wide aisle to the counter. Chairs are not fixed, so could be moved aside for a wheelchair. No customer toilet.

According to a photo on Flickr, as of c. 1985 the premises were occupied by a shop called "too" (sic).

At some point it was a shoe shop called Kookaï, and a clock with this brand name was still present above the building for several years photo, though by March 2017 it had been rebranded to the then-occupant, Greggs photo. The Kookaï sign was also revealed in mid-2014 when the old 4 Feet sign was removed after its closure photo.

As of November 2016 it was under refurbishment to open as a branch of Greggs photo, and this was open by the middle of the month.