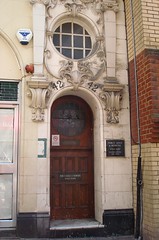 As of August 2014, the upper floors of 42 George Street were occupied by a solicitors practice known as Percy Holt and Nowers.

We haven't been able to verify whether it was still there during the years up to our cut-off point of December 2019, but the history of the practice during the 20th century can be found at The Past and Present of Croydon's London Road.