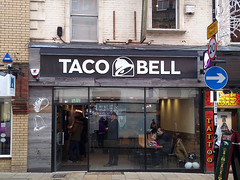 Fast-food taco place on George Street, part of an international chain. It opened in December 2018 and has both eat-in and takeaway facilities.

It was previously a cafe called Scrumpchino's photo, which (according to Google Street View) opened some time after July 2009; but this closed down again in October 2018.

As of November 2018 it was vacant but under refurbishment to become a branch of Taco Bell photo. This opened in December 2018.