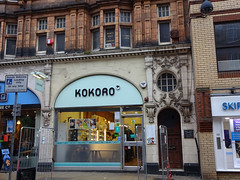 Sushi place on George Street, part of a small chain. It opened in early 2016.

Much of its business is takeaway, but it also has interior seating for 20 or so.

As of August 2012 it was vacant, with signage indicating that a Mexican fast food place called Mexway would be opening there soon photo. Mexway photo opened in November 2012 but closed again at the end of January 2015 photo of sign. It was still vacant as of early January 2016.

A sushi place called Kokoro was open there by early April 2016.